The Internet is strange. It is full of websites and some even include lists. Lists full of questions for example like this one: 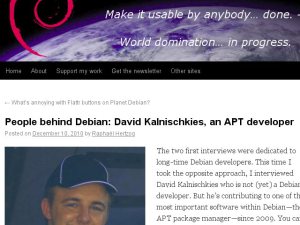 Don't worry, this post is really a Déjà-vu. My (now well known) stranger from across the street was interviewed by Raphaël Hertzog and reacted in a for him very typical fashion:

Would you accept to be interviewed?

My very first reaction was: Are you sure you wrote to the right person? Obviously, its unlikely that you mean somebody else with that name… But still: Interviewing me?

This internet thingy is really strange. Good that I am away now for the weekend with "my" kids (without internet of course), so I can relax a bit and be shocked again next week… "great" (at the time you read this, the interview or both, I am already away, )

But let me answer the question you very likely have on your lips: No, i am not sunburnt. The picture shows me in Italy (you might remember: ROMA 2010) so it could be cause of exposure to sun, but in reality the picture is very blue-tinted because of a bus-window between me and the camera (You don't trust me?), so this complexion is gimp'ed. As you can see, I am not a pro… but the other picture options would be even worse.

Its interesting, I was told already months ago that it was hard to find in the massive ROMA collection a picture depicting me. That caused a serious headache for my fellows trying to create a presentation with entertaining pictures to show at a revival without showing someone too often -- or too few in my case. I laughed after I was told it was so hard. You know, this horrible evil laugh nobody wants to listen to… And now I was hit by the very same problem… self-owned. 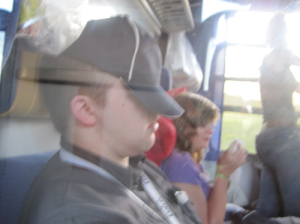 The only other option (expect of groupphotos maybe) can be seen on the left. If we would ask my kids, they would say that this picture shows all I did on the seventeen hours travel - and that's properly the truth. 🙂︎ Still, not very useful from an interview point of view.

So on the weekend now one of my goals will be to get some usable pictures. Who knows then the next website on the internet wants to show a picture of me together with my name…

But one interview is enough for now. It's not that it is bad to be interviewed, Raphael did a great job after all as I am not an easy client, but talking isn't one of my hobbies, even if its written talk (which isn't in conflict with writing a lot as you can see and as my kids can tell you).

So, and now enough of boring chit-chat. If you have additional questions, just ask.

This blog has no centralized comment section. Feel free to write a comment in your own blog, some other page or channel you are on to discuss stuff and/or contact me by mail. I am happy to add pointers and updates as needed.

Hi! I am David Kal­nisch­kies and this is my blog about Debians beloved package manager APT and one of its developers, who might also talk about other things here including:

Alternatively you can also look at a chrono­logical list of all my postings in the archive.